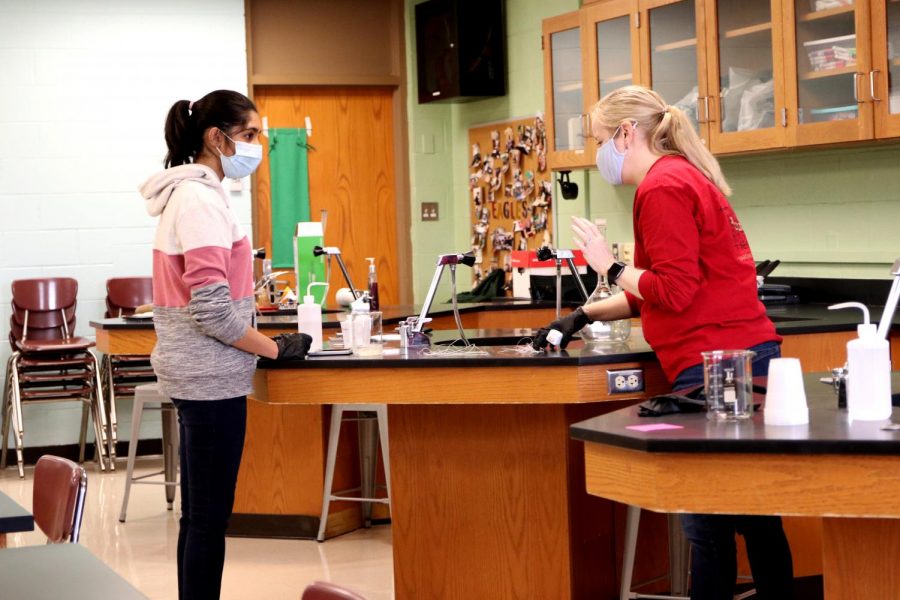 AP Biology teacher Andrea Adams works with senior Deepika Sitaraman on a lab in November of 2020.

Using your hands and going up and down stairs may not seem like a big deal, but to some teachers, everyday tasks like running labs in their classrooms or even getting around the building can feel impossible due to the effects of autoimmune disorders.

Teachers Elizabeth Boomer, Rachel Alvarado and Andrea Adams all share having an autoimmune disorder in common, as well as being beloved by the student body.

Boomer is diagnosed with Fibromyalgia, although she is still currently in the process of being diagnosed. This can take up to seven years on average. Adams has three confirmed disorders: Hashimoto’s fibrosis, Sjogren’s disorder, and Fibromyalgia. Alvarado is currently diagnosed with Rheumatoid Arthritis and will be continually screened for the development of another autoimmune disorder.

Autoimmune disorders occur when the immune system attacks and destroys healthy body tissue. Many people aren’t aware of the effects these disorders can have.

People with autoimmune disorders are also more susceptible to getting sick and have a harder time recovering from minor injuries and common illnesses.

“I sliced my knee open shaving and it took a month to heal,” said Adams

The current pandemic of Covid-19 and the number of cases growing has proved challenging for these teachers.

“The death rate is always in the double digits. It has made me a little paranoid which has been harder than the actual diagnosis,” said Adams.

“It has been very scary with the pandemic. I was already at a high risk because of my asthma but now I’m on autoimmune suppressors so I am so much more vulnerable now,” Boomer said.

There are more than 80 common autoimmune disorders present in the United States. These illness affects nearly two million Americans each year. 90 percent of these cases are found in women.

“I think the world could use more information [about autoimmune disorders]. We are starting to see them more and educating the general population wouldn’t hurt,” Alvarado said.

According to the US national Library of Medicine National Institutes of Health autoimmune disorders in Native American communities are highly prevalent and oftentimes atypical on most reservations.

The exact reason people have autoimmune disorders are unknown. One of the most popular theories released from the United States National Library of Medicine is that microorganisms, like a certain type of bacteria or virus, can spark a change in the human immune systems and essentially reprogram it to do the job wrong.

Autoimmune disorders can result in symptoms like abnormal organ functions too having constant fatigue. It all depends what kind of illness a person has and how their body handles it.

“Teaching is an emotionally, physically and mentally a demanding job. For my own health I have to leave as much work at work as I can,” Boomer said.

People who suffer from an autoimmune disorder often have to change major aspects of their lives in order to accommodate their symptoms.

“I would just flinch and cringe and it was hard to explain to teenagers I canceled a lab because I can’t move my hands,” Adams said.

Possible treatments for these disorders are being developed today. Dr. Dinesh Khannah, a head researcher at Michigan University, is working on a drug called Elotuzumab which would greatly improve the quality of life for many suffering from scleroderma, lupus, rheumatoid arthritis and other similar disorders.

Adams is currently taking a medication classified as a biologic. A biologic medication is a certain substance grown within a living organism, like a mouse, which is then euthanized and used to treat different disorders.

According to the NCBI the life expectancy of someone with an autoimmune disorder if treated is consistent to a healthy person. With that being the case, quality of life can be next to nothing with some symptoms and constant flare ups.

These teachers have all changed their lives significantly to accommodate their illness.

“If I were to hard-core deep clean my house it would take four to six hours and I wouldn’t be able to get out of bed. It’s hard to realize you can’t do things you once could,” Alvarado said.

While these obstacles are in place these teachers continuously do their jobs and live their lives.

“The most important thing that makes it tolerable is it does not define me. If you let that be the thing that tells the world who you are then they will never see passed it,” Adams said.

To learn more about resources about autoimmune disorders click here.