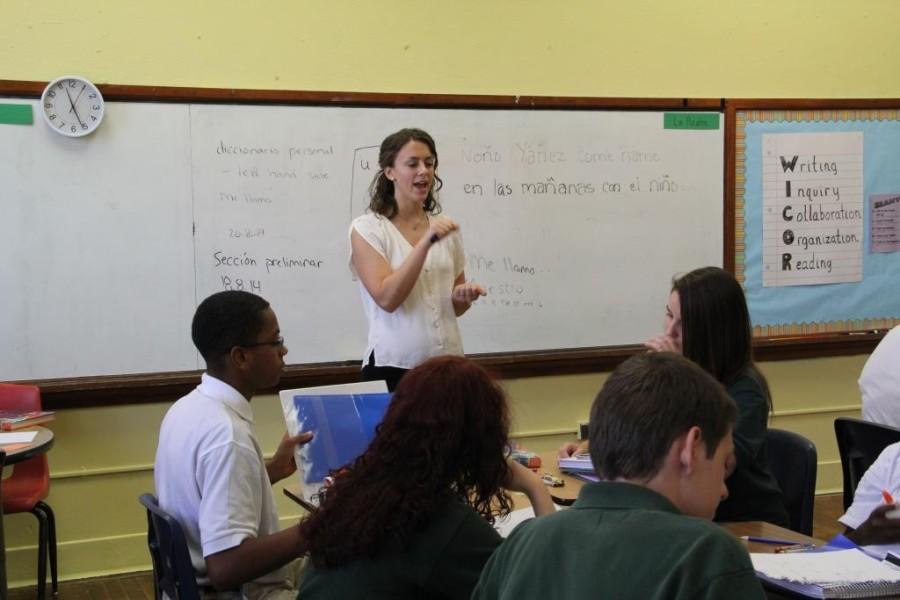 Allison Stroud gives instructions to her Spanish I class in August.

This is Allison Stroud’s first year as the Spanish I and III teacher at Harding Charter Prep.

She graduated from Oklahoma State University, majoring in Spanish and minoring in Sociology. She studied abroad in Barcelona, Spain and also spent a year doing mission work in Lima, Peru.

“I was basically Church-planting,” Stroud said.

Before coming to Harding, Stroud taught at the Oklahoma School of Science and Math. At the time, she worked at a bakery.

“My passion is cooking,” Stroud said. While working part time at the bakery, she ended up with a part time teaching job “by chance.” A friend of Stroud’s was teaching Japanese at OSSM, and told her about the part-time Spanish teaching position at the school.

“I decided to interview since I needed another part-time job, got the job, and that’s how I became a teacher,” Stroud said.

Stroud also has a love for plants. During the summer, she started a small business called Happy Day Succulents. She sold wreaths that had living plants growing throughout them. Now, the summer is over and she’s working with her brother-in-law, Adam Stroud. She loves working with him.

“It would be awesome if my husband came (to teach) and then we could just be one big happy family here.” Stroud said she loves her students, co-workers and the environment. She likes it more than she expected, “even though I had high expectations.”