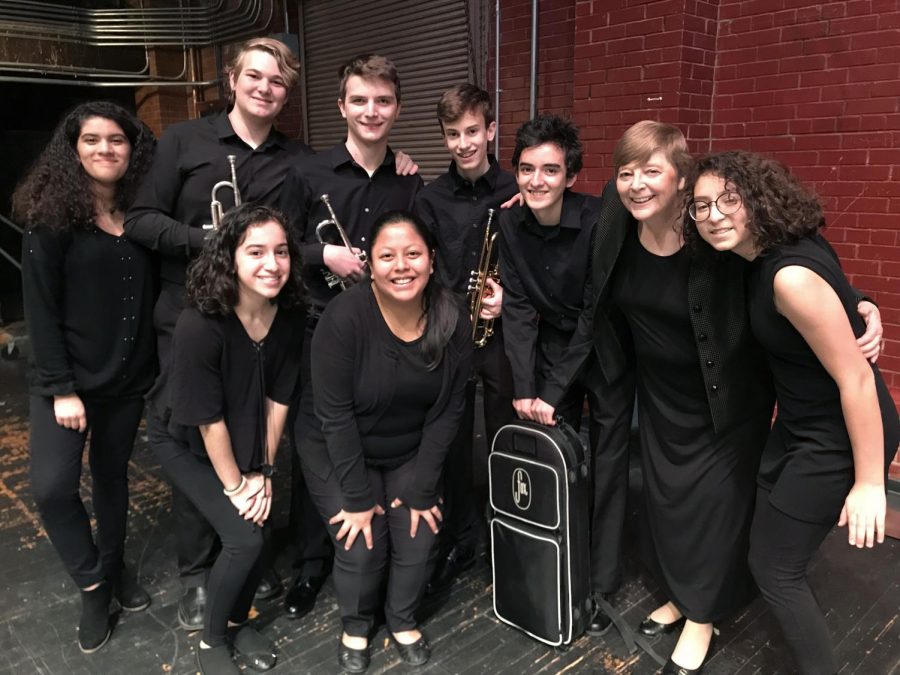 Members of the HCP band hang out with clinician Susan Clothier at the All City Clinic after their performance.

Eight Harding students performed at the All City High School Honor Band at Northwest Classen on January 27 under the direction of Susan Clothier.

Students auditioned in November, and those who were selected rehearsed together in January for a two-day clinic and a concert.

“This was my second time being at All City. The first time we played easier music, and it was just a very different experience because I was a little freshman in a big high school band. It just wasn’t very challenging which was disappointing. This year was a big step up and I liked that a lot,” Catteeuw said.

Parrott’s favorite part of the clinic was working with the clinician, Clothier. “We had worked with her before [at HCP]. She worked with us on our pieces, and helped us improve. I liked her teaching style and how she approached things,” she said. “Instead of telling us we suck, or making us do something over and over, she was like ‘do it like this’. She was great.”

Parrott enjoyed playing “Moscow 1941.” “It was exciting and uplifting and there was always something going on. You have those slow pieces that are boring, and I have to sit there and hold a note for five years. Or there’s some were you’re doing scales up and down, it’s crazy,” she said.

Though a fan of “1941,” Parrott didn’t like “Foundry” because it was “the most challenging one to play, and weird.”

Band director Kelli Taylor was pleased with the groups poise and how respectful they were throughout the clinic.

“Music is like amazing…It’s cool getting to meet other people and making music. Ms. Taylor used to say certain pieces of music would like give you goosebumps and stuff like that. I’d never had that, and during ‘Moscow’ there were two parts where I literally got goosebumps,” Jaime said.