Watching while the world burns 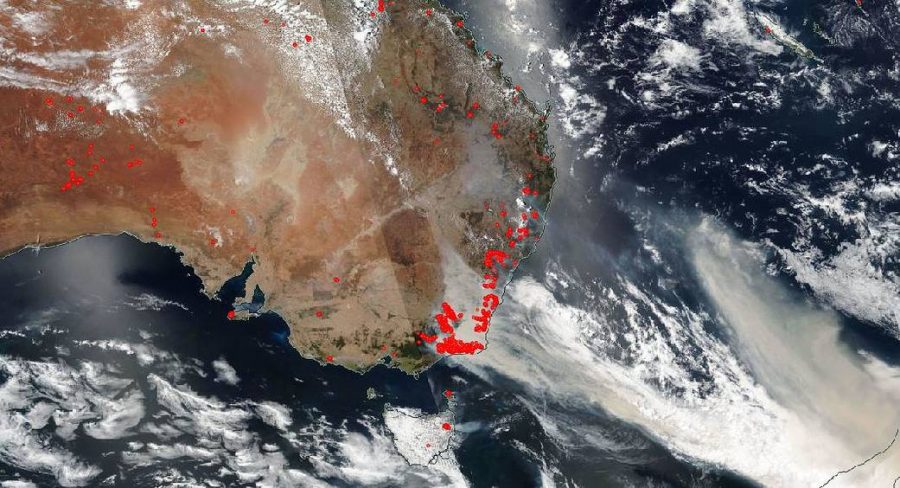 This NASA image shows the location of the bushfires in southeast Australia. The fires have burned over 32,400 square miles as of Jan. 7, an area of land 80 times larger than the fires that burned in California in 2019.

A haze has descended upon Australia due to a series of bushfires beginning in September.

In total, the fires have claimed the lives of 27 people, destroyed 15.6 million acres (a third of the size of Oklahoma), and killed an estimated half a billion animals.

Despite cooler temperatures bringing some solace to the nation, the future is still unsure for the residents of Australia coming home to destroyed houses and animals coming out of hiding to a lack of food and water.
A Climate Cause and a Criminal Cause
New South Wales Police have taken legal action against over 183 people for various reasons including alleged noncompliance with the total fire ban, negligence in discarding cigarette butts and matches or deliberately starting fires. Investigations into possible criminal causes to the fires are still ongoing.

Fires have come after a record-breaking year of temperatures and drought. According to Australia’s Bureau of Meteorology, the average temperature in the country was 34.7° F above the long-term average.

This has been caused due to a natural phenomenon called the Indian Ocean Dipole, or Indian Nino, which is an imbalance in temperature between the western and eastern parts of the ocean. Correlating with the cooler water off Australia’s western coast, the winds have become weaker and, therefore, have diminished the amount of rain coming to the country. Furthermore, the effects of the Dipole have been aggravated by climate change, say scientists.

“2019 would not have been pleasant anyway, but climate change has made it worse. We are focusing now on the bushfires, but the underlying heat has been driving these conditions for much of the year,” said climate scientist at the University of New South Wales Dr Sarah Perkins-Kirkpatrick.

The same event happened back in 2006 to 2008, causing the 2009 Black Saturday bushfires in Victoria, which had the highest amount of fatalities for a bushfire (173 people) in Australian history.
Aid Efforts
Several organizations are accepting donations currently for the bushfires including the Australian Red Cross and Salvation Army Australia, which trains and deploys a volunteer force in addition to accepting financial aid and other donations.

Here at home, The OKC Zoo and Botanical Gardens have pledged to donate $10,000.

“This crisis reminds us just how fragile and precious life is. Our goal of preserving wildlife and wild places isn’t limited by our state’s or nation’s geographic boundaries. We have a global mission that crosses every border and ocean,” said OKC Zoo executive director/CEO Dr. Dwight Lawson.

Other companies and individuals have found creative ways to help. For example, Airbnb is providing free housing for affected areas. Apple has begun taking financial donations, which is advertised at the top of their home page. Furthermore, a bidding campaign was set up for authors with the hashtag “AuthorsforFireys” to benefit Victoria’s firefighters.