It's back to in-person tournaments for the speech and debate team, who recorded all their performances last season 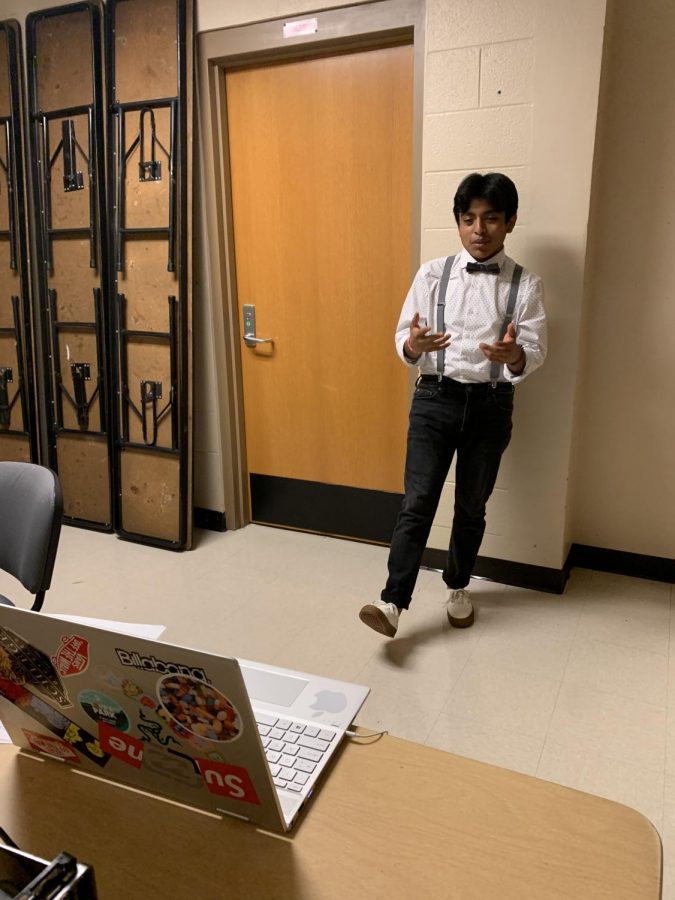 Senior Keegan Neal, shown here in spring 2021 recording his speech on a laptop, participated in virtual speech and debate. The team will compete this year in the traditional in-person format.

After a tough year with COVID-19, the members of the speech and debate team said they are looking forward to the new tournament season.

For speech and debate, 2020 was a very challenging year, as all the tournaments were virtual, and the team was not able to be social or support each other as much as they would have liked. Captain Ayden Read said it was “demoralizing, and the fun was gone.” There were new challenges on a regular basis and most people would only compete in one tournament.

Despite last year’s challenges, the team is back for an in-person season and members said they hope for the best. This year will be more relaxed with only seven tournaments, as opposed to the usual eight, one of which will be the team’s first away tournament.

After a year of distance learning, members need to sharpen their skills, so the focus for this season is rebuilding teamwork, socialization and open communication in addition to the usual skills like memorization. There is a lot of relearning to be done, team members said.

Another thing that will hopefully make a comeback with is winning sweepstakes, a prize for the most awards during a given tournament.

New membership is off to a slow start, but both Ferguson and Read are confident in the new group, saying they are eager and exited to compete. Another goal with all the new people is to get the captains comfortable with training novices and encouraging them to go to early tournaments. Overall people are excited for this new competition season.

New students interested joining Speech and debate are welcome to join, according to Ferguson.

“It’s definitely not too late in the season to join,” Ferguson said.