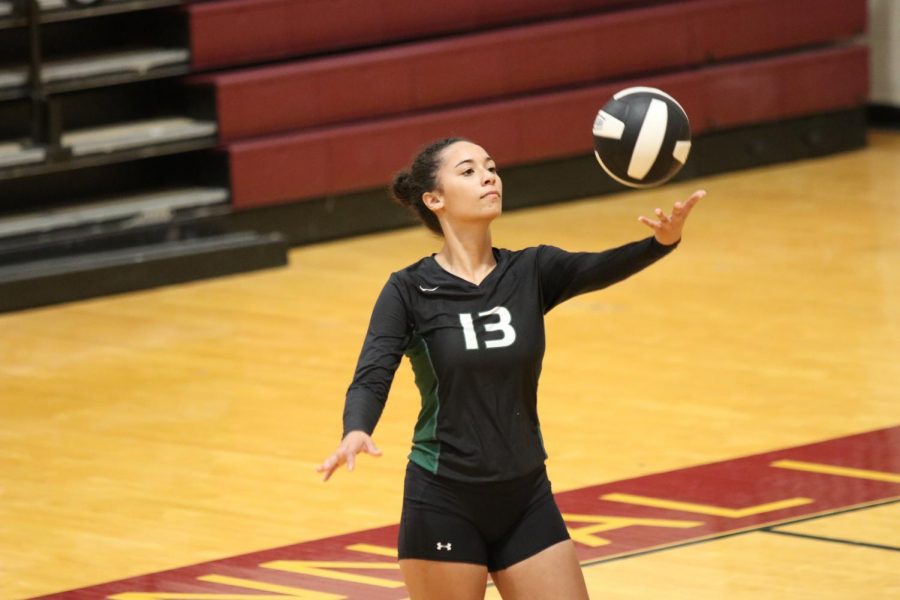 Senior Emily Popielec serves the ball in a game against Seminole Charter on Sept. 3.

After a tough 0-10 season, the  volleyball team rebounded, starting the year with a 3-3 record.

Coach Mack took charge of the team. His plan was to adjust his coaching style to the potential of each player.

“You must coach to the potential of your team,” he said. “Try to help them realize their potential, and not to settle for less.”

Mack also is going back to the basics.

“We always work to improve basic skills, and honestly the more you play, the more you understand the game,” he said.

Even returning players like junior Karen Aleman, who has been playing for two years, the basic skills must be honed.

“I have improved, I’ve  noticed that my serves have gotten better,” she said.

The new freshmen brought talent to the team, but Aleman said they still have plenty to learn about getting past the nerves.

“The freshmen are really talented, and excited to play, but they’re nerves get the best of them” she said. “We need to be more confident when going for the ball, we get to it– then choke.”

Mack has been attempting to solve this problem. “I just want them to believe that they can win, and to have confidence,” he said.

Sophomore Brooklyn Dean said that the team is really close but they need to get better at working together, becoming a community.

“In practice it’s second nature, but on the court the focus is on us. It’s kind of scary,” Dean said, referring to the issues the team has had with conquering on-court nerves. “I feel like I need to be more aggressive, and follow through with my serve.”

The next volleyball game is at Douglass High School on Sept. 23 at 4 p.m.