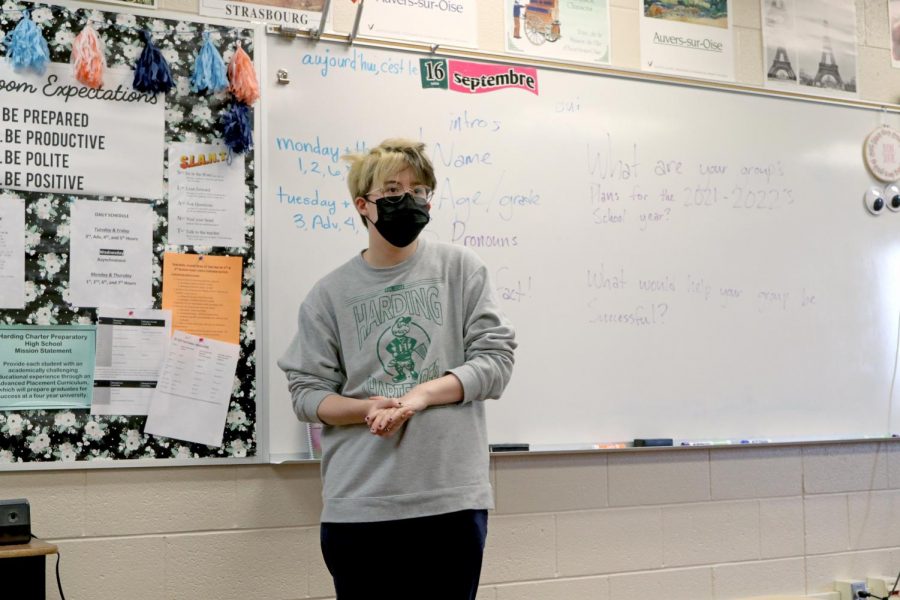 Junior Vinny Langworthy leads a meeting of the HCP QSA.

According to a recent national survey, around 1.3 million kids, or roughly 8% of all high school students in America, report being lesbian, gay or bisexual. These students are twice as likely to be bullied, both online and on school property, and more than twice as likely to stay home from school to avoid violence they felt might befall them on the way there, or on school grounds. Almost 30% had attempted suicide, more than four times the rate for straight students, and 60% reported feeling “sad or hopeless,” twice the rate of their straight peers. They also used hard drugs far more often: 6% reported using heroin at least once, and 5% reported injecting a drug intravenously, which was four and five times the rate among straight kids, respectively.

Sponsor Emma Smreker said the group has grown in the years since its inception, and it fills a vital role for queer students at the school who may need a role model. There are more than 4,000 G(Q)SAs in schools nationwide.

“Maybe they are struggling with their identity or sexuality and they see a junior or a senior that has it kind of figured out, they can see that it is something possible and it brings everything together and makes them feel good and safe,” Smreker said.

Having a QSA at school can help students feel valued and accepted for who they are and it can positively impact academic performance in school. Other positive impacts of GSAs/QSAs on students’ lives can include higher self esteem, increased sense of empowerment and hope, new friendships, improved home and school relationships, more comfortable being visible as LGBTQ2S+ or as allies.

Organizer Vinny Langworthy said his favorite thing about QSA is the connections made with other students.

“Because I feel like normally everyone can be very separated especially if there is a non-accepting culture, but with QSA I really get to bring everyone together and make connections that can be beneficial for queer students,” he said.

Smreker and Josh Higginbotham started off as co-sponsors because there wasn’t a QSA or any type of presence for the LGBTQAI community. Smreker knew that it was something that she wanted to start as a teacher and has continued it since then.

Smreker’s favorite thing about QSA is getting to meet different students, because many of the students in QSA aren’t in her French class.

Representation matters to students and having a QSA at school is particularly important. Schools need to understand that a QSA might be the safe place that many queer students rely on and should be a club that many more schools should be open to have.

“I fully believe that a lot of the problems that surround the community is lack of communication and lack of understanding. I wanted to create a space where those students and allies can get to know each other and learn more about the LGBTQ+ community,” Smreker said.

“I think it’s important because a lot of queer students can feel very alone at times and isolated at times,” Langworthy said. “And being able to get everyone together, especially creating a culture that creates change where it’s needed, creating that environment, because I feel like people don’t feel like it’s possible for them. If we have a group of people talking about their experiences and the perspectives it would be a lot easier for us to make an effort.”

Langworthy encouraged all students to check out the club, which meets on Thursdays after school in Smreker’s room.

“To support and learn about your queer peer’s perspectives, and also just each other! Most times it really just is socializing unless we have an issue to tackle or a subject to educate on,” Langworthy said.

“If you like positive change within the school, it’s the place to be for those sorts of discussions.”